Valentine’s Day in Spain is not a traditional Spanish celebration. But the same applies in Spain as it does in many countries around the world. Gifts and cards are exchanged. Roses, cupids and hearts adorn everything. And chocolate sellers do very well. But where does it all come from?

A little bit of history

Saint Valentine was the name given to a number of martyrs during Roman times (Valens, meaning worthy, strong and powerful) and the day was established by Pope Gelasius I in 500 AD. Though there was no romantic element to it back then. Exactly which martyr (or even if it’s only one) is celebrated on February 14th is up for some debate. Though at least one of them was buried on February 14th in Via Flaminia, north of Rome. This confusion led to the day being removed from the calendar of saints by Pope Paul VI in 1969. 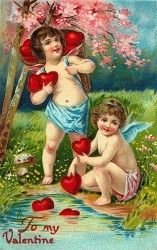 St. Valentine’s Day as we know it today with the emphasis on romance and love seems to have developed a few centuries later. It is said that the first reference to St. Valentines Day being a day for lovers was from Chaucer in the 14th century but it wasn’t until the 18th century that this idea really began to develop. So there is no real historical link between a Saint Valentine and romance. It has been built up over the centuries through literature.

Now, part of me despises the modern marketing of St. Valentine’s Day (that would be the old grumpy part), but of course there is nothing wrong with celebrating your love for someone and it should be encouraged. It’s all very well saying that you should do it every day and not just on one but sometimes these simple gestures get forgotten. Of course you have the persons birthday to celebrate but why not have another day too. A couples day.

Spain loves a celebration. And they love their saints. And although St. Valentine’s Day in Spain isn’t an official holiday, I’m sure the bars and restaurants will be busy.

But Spain actually has another ‘lovers day’ that I think has a far better case for celebration. St. George’s Day, the same day that is celebrated not nearly enough in England even though it is our patron saint too. But as I said, Spain loves a saint, and they do it properly here.

Many countries have Saint George as their patron saint and most celebrate it on April 23rd (the accepted date of Saint George’s death in 303 AD).

Though Saint George was real and did some pretty gallant stuff, the story of him slaying the dragon and saving the princess is of course legend. But that still makes St. George’s Day far more romantic. 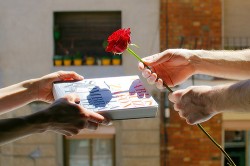 In Catalonia it is called La Diada de Sant Jordi, also known as El Dia de la Rosa (The Day of the Rose) or El Dia del Llibre (The Day of the Book) and is a public holiday. The main event is the exchange of gifts between loved ones. Roses have been associated with this day since medieval times but more recently the giving of books is the custom. This came about in the 20th century as some bright spark of a bookseller realised that Josep Pla (1897-1981), Miguel Cervantes (1547-1616) and William Shakespeare (1564-1616), all great proponents of the written word had all died on the same day, April 23rd. Again, far more valid a celebration in my opinion.

So, please do celebrate Valentine’s Day if you so wish. I wouldn’t want to be the reason for any break-ups. But let’s make sure we celebrate St. Georges Day too. In my eyes a far more valid day for the celebration of love and literature. And it will make up for the poor job they did of it in England when I was growing up.