But, suffice it to say, if there has been a reduction it is in part thanks to the work of Colombian-born Eliana Guerrero, the Pickpocket Huntress of Barcelona’s Subways. END_OF_DOCUMENT_TOKEN_TO_BE_REPLACED

This forgotten BBC documentary from 1979 was the final part of a 5-part series entitled ‘Realidades de España’ – Spanish Realities. It was uncovered by writer and chemical engineer Josep Grau-Bové who obtained it on VHS video from a friend in Glasgow. He digitised and uploaded it to YouTube in the hope that more people would see it. In the last two years 41,548 people have (at the time of writing).

I find it fascinating that this documentary from 35 years ago, made only 4 years after Franco’s death, should end up on the internet for a new 21st century audience. Even more fascinating that the story it tells has not moved on very much at all in the following 35 years. END_OF_DOCUMENT_TOKEN_TO_BE_REPLACED

Into the Night: A Timelapse Video of Barcelona at Night

There’s something very evocative about watching the city at night from up high. Wondering what all the people below are up to. And I’m a big fan of the timelapse technique when used well. So Jordi de Temple’s video, Into the Night, is right up my street.

“Into the Night” is an exercise of light and colour of 4 minutes that tries to show Barcelona, its surroundings and some specific areas of Catalonia, from a different, unusual and cinematic point of view.

To achieve that, has been used the time-lapse technique, which allows to capture the time at specified intervals, frame-by-frame, using mostly, in this case, long exposure.

Part of the project has been made in the so-called blue hour, whose diffused light has some features that allow to capture spectacular sunrises or sunsets full of warm colors thanks to the position of the sun relative to the horizon. It is in these moments when the skies still have shades of color and the natural light is mixed with the artificial light of the city, thus being able to capture skies in detail and urban buildings illuminated simultaneously.

I’m always waiting for that moment when the light changes and becomes something special, a brief moment where the urban or natural landscape collides with light and composition to create beautiful images that are hidden to the naked eye.

This has been a photographic adventure of understanding the light and color of the night. An opportunity to observe the urban space and its density and to contemplate how these elements converge. An exercise of patience and perseverance throughout dozens of nights and dawns of cold carrying heavy stuff. And of course many hours of postproduction.

END_OF_DOCUMENT_TOKEN_TO_BE_REPLACED

Among them is Andrés Bartos, the writer and director of the short film Lapin, une étrange histoire d’amour. The film is a dark fable about a man who falls in love with a rabbit-like girl and discovers a strange world under his apartment. The director described it to me as “though Before Sunrise were directed by David Lynch possessed by the ghost of Chuck Jones.” Consider my curiosity piqued. I met up with Andrés Bartos to find out more about the film and get his take on what makes Barcelona a good place to shoot a movie. END_OF_DOCUMENT_TOKEN_TO_BE_REPLACED 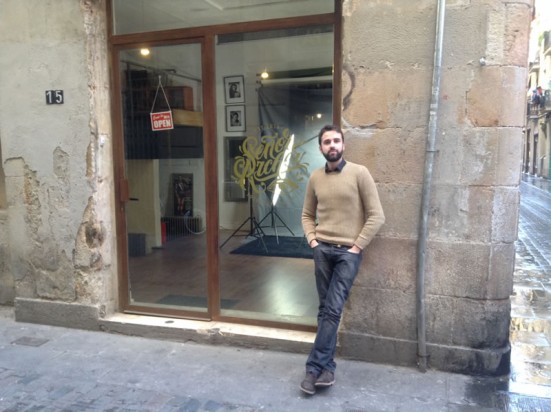 A novelty it may be to some. But this is a process that is achieved with love and care. It fits in agreeably with the current slow movement. END_OF_DOCUMENT_TOKEN_TO_BE_REPLACED