There’s a large cat. In the Raval. 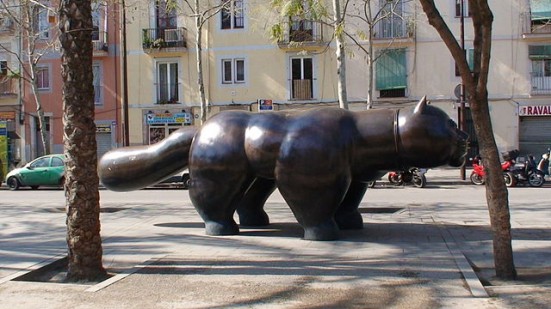 It is simply called El gato del Raval, The Raval cat. A large statue that is a landmark of this often frowned upon barrio. At one end of Rambla del Raval it stands to attention.

It is climbed upon, hidden under and circled by children. It is asked to pose for incessant photos, it’s whiskers never out-of-place. I admire this cat.

It’s body looks like that of a bears. It has a tree trunk of a neck. A tail like an elongated party balloon. And a face… I can never quite work out the face. It’s serene I think. Quizzical. Maybe just a little pissed off.

This funny looking statue is the work of sculptor Fernando Botero. A Columbian painter and sculptor famed for is voluptuous figurative style.

I’m not entirely sure when it arrived. Whether it was donated or bought. But I assume it is part of an overall effort to regenerate the neighbourhood and Rambla del Raval.

I like it. I think it’s one of the most charming pieces of public art in Barcelona. If you haven’t given it the attention it deserves then I think you should. I reckon he secretly likes it.