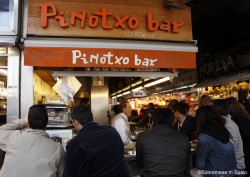 What is a sobremesa?
Sobremesa is one of my favorite Spanish words, but it’s much more than a word, it’s a cultural act. In Spain people take their meals very seriously, hours can be spent at the dinner or lunch table chatting long after the plates have been cleared and the coffee has been served. It’s a time to bond with your guests, savor the moment without rushing and pragmatically, to digest your food. Overall it’s a wonderful and celebrated practice throughout Spain.

“I write about food, take pictures of food, think about food, turn every conversation into some topic of food, so it comes as no surprise when I’m in Barcelona, one of the food capitals of the world, I chow down. What I love about Catalan cuisine and the food culture of Barcelona is its determination to provide fresh, flavorful combinations to the masses at reasonable prices and with a slice of humility. Sure some have received Michelin stars, or can show off hundreds of press accolades adorned on the wall, but besides this, many continue to do what they set out to do decades ago. Setting an example for new chefs and young talent to follow in role-model fashion. Catalans have a very concrete culinary identity and I think this confidence shines through in their creations, meanwhile the patron walks away with a smile and without having this experience leave a whole in their wallet.

I would start my morning bright and early around 8 or 8:30 with a café con leche and hefty portion of garbanzos con butifarra (in Spanish and called cigrons amb butifarra in Catalan), from Bar Pinotxo in La Boqueria. Juanito is quite a sight and a Barcelona legend – heed my words, do this now! Not to say that he will pass on, but the day that he isn’t loading the espresso machine with coffee grinds will be a sad day for the entire city, and possibly the whole state of Catalunya. 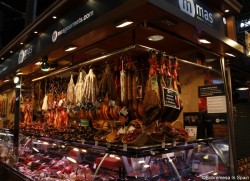 I may meander around the market for a bit because it makes me feel alive, and the early morning smells hang gently over the fog-layer of the Mediterranean capital. I would grab 150 grams of mini fuet from Mas Gourmets for the road, at stalls 305-308.

Trying as hard as possible to avoid La Rambla, I’d tuck into the Barri Gotic, where I’d allow myself to get lost, bumping into Roman walls and ruins in one corner and a Jewish synagogue from the Middle Ages on the other. If the man on the side of the cathedral at Carrer del Bisbe is singing Pavarotti’s Nessun Dorma, I will fall into the cheesy-romance of the moment.

Then I’d hop on a Bicing and hit Barceloneta, where a whole new world behind the Passeig de Joan de Borbó awaits the visitor. I can never enter this barri without buying something fresh out of the oven over at the bread Mecca which is Anna Bellsolà’s Baluard. A few hours at the beach and a quick dip in the ocean (always ask your neighbor to watch your bag, and in return do it for them), and I’m off again into the city center.

If I’ve gotten hungry – which is very likely – I’ll get my 5pm merienda fix at Granja M. Viader (c/ Xuclà 4-6), a classic yet retro spot for dairy products, desserts and pastries which is rumored to have been where Cacaolat, the famous Catalan chocolate milk beverage, was created. 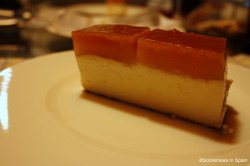 Perhaps I’ll pop into CCCB, for a photo exposition, which is often overlooked and which I prefer to MACBA. As a sidenote I really enjoy their outdoor movie sessions during the summer, they always choose super indie, almost unheard of films, from young budding artists to the master Luis Buñuel. If me and my guests snag good seats (usually arriving an hour and a half before showtime), we will bring with us take-away kebabs from El Cocinero de Damasco, located behind Plaça de Sant Jaume.

If we are out of luck, or it doesn’t happen to be summer weather, Quimet y Quimet (c/ Poeta Cabanyes, 25) is my favorite city spot for innovative yet incredibly simple montaditos, small sized tapas on a single round of toasted bread, served straight out of a bunch of tins – yes, people I said tins, called conservas. You’ll have to see it to believe it, and tasting it is an even better option. There is a menu, but if you give Mr. Quim a guide to what you like, he’ll whip up something spectacular. I highly recommend the house Gin Tonic as well to all my fellow Barcelona day trippers.”

Lauren Heineck, creator of Sobremesa In Spain, is a cien por cien foodie, obsessed with all things food and drink, even more so if she can meet the people or animals behind what she eats. After a bout in Valencia and a year in Barcelona she’s now soaking up sauces from her plates, and others, in Madrid. She pays attention to quality, detail and taste and enjoys sharing it with the rest of the English speaking world. Also follow her on Twitter @jamon_y_vino.