When I was young and I lived in Barcelona, my perfect day would have been very different than what a perfect day in the city is for me today. At the time, you couldn’t get me out of Las Ramblas, el Raval, el Barri Gótic and El Born. I had spent my childhood and teen years between Tibidabo and Sarrià. As soon as I started Uni and I discovered the old city I fell in love with it. I moved there, living in various areas, all below Plaza Catalunya. That was the time when the Francoist dictatorship had just ended, and the streets were popping with newly liberated youth going crazy with hedonism and experimentation after having grown up repressed religiously, linguistically, politically, and sexually.

I would have started my day at the Universitat de Barcelona—where I studied for my B.A. Around 1 pm, I would have headed off to El Zurich (right in front of the beginning of Las Ramblas) for a beer with friends, then walk down Las Ramblas to eat at Café Egipto (behind La Boquería Marquet). Afternoons, I spent a few hours at the Biblioteca Nacional de Catalunya studying (C/ Hospital, 56)—I loved books, and I loved the library, so this was heaven for me. For dinner, perhaps I would eat at my friend’s house in Carrer Sant Pau or go to a cheap restaurant in Plaça Reial; then, it was copas at various bars in El Born neighborhood until about 2 am; and dancing salsa until 5 am at the now defunct Tabú, in Carrer Escudillers.

Now that I’ve been living in California for thirty years, and I go to Barcelona in the summer to visit family, I spend less time in these neighborhoods. They are full of tourists, mediocre restaurants serving mediocre and overprized paellas, and cheesy souvenir stores. I find myself returning to the areas of the city that I used to run from.

A perfect day for me today would start by revisiting my old playground: Tibidabo. I grew up in #59 of Avenida del Tibidabo, before it was crisscrossed by an urban highway, and I still like to go to the amusement park with my nieces from time to time. As a youth, I took the blue tram every day to get from the bottom of the avenue to my house. I’m very fond of el tramvia blau and I love taking it again en route to the amusement park.

In the summer, when Barcelona is boiling with heat, the breeze on top of the mountain is refreshing—not to speak of the amazing views! The attractions at Tibidabo are less thrilling than at other parks, but many are unique and full of history. Among its special draws is an automatons museum with more than forty pieces, some coming from as far as the 1880s.

After a couple of hours at the park (it’s quite small), I would leave my nieces with their parents and take the 22 bus line on Passeig de la Bonanova to Carrer Mandri. I’d walk down to the restaurant El Pescadito de Mandri (Mandri #54) and sit at the terrace for their daily menu. It’s a bit pricier than others (it ranges from 22 to 33 euros, depending on the day), but the food is delicious.

Then I would stroll to the Sarrià neighborhood. Sarrià was an independent town but as Barcelona grew, it engulfed it. It still retains that small-town feeling, with narrow streets, a neighborhood church, and a pedestrian promenade, el Carrer Major, full of little stores and restaurants. Many decades ago my family used to have a summer home in Sarrià. Now it seems weird because it’s only a twenty minute metro ride from downtown, but in centuries past, it must have seemed far by buggy. 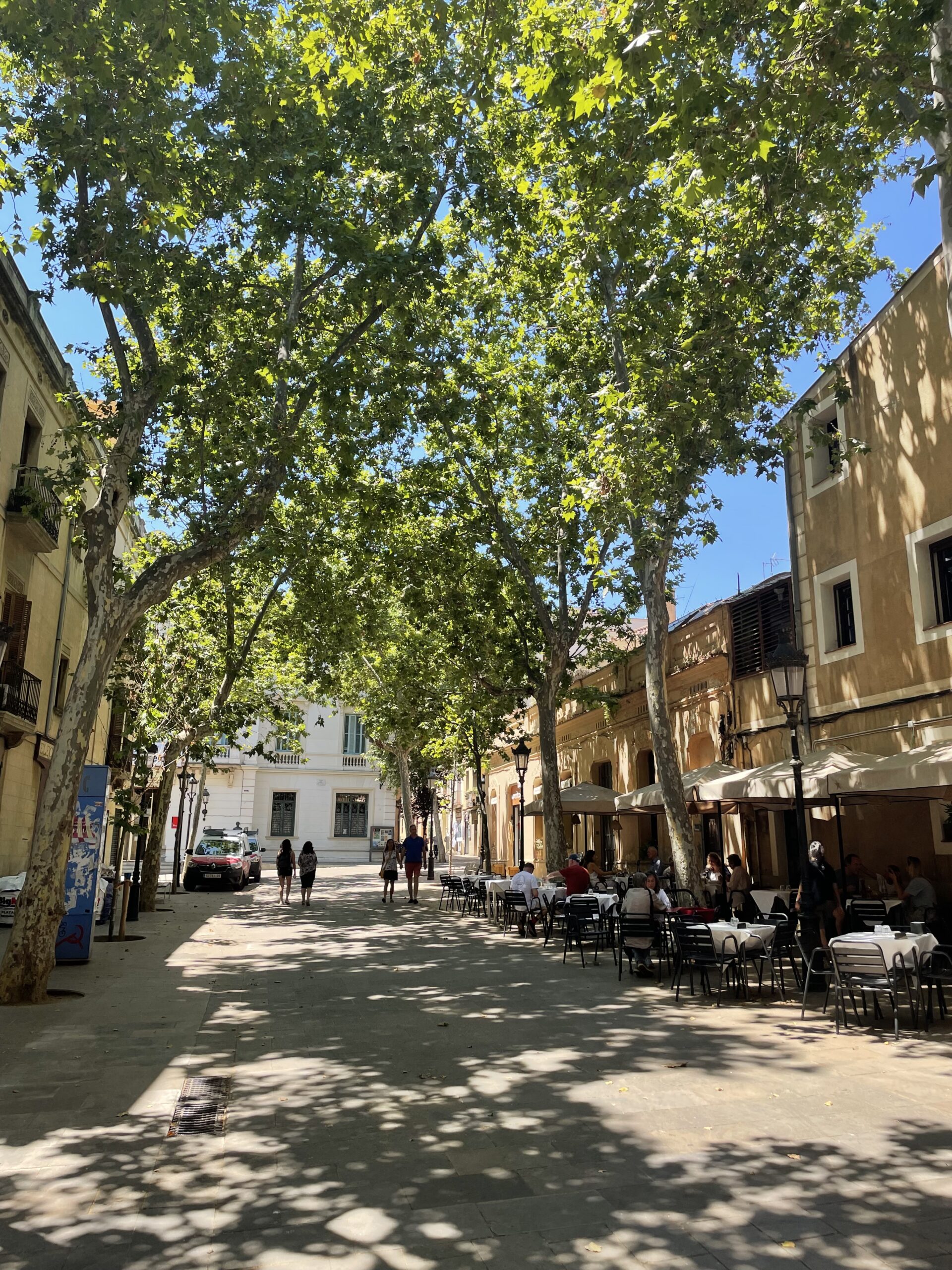 I’d take a leisurely walk down Carrer Major, checking out the little stores, and meet my friend for coffee at Café Orlandai (C/ Jaume Piquet, 23). This cafeteria is located in Casa Orlandai, a nonprofit association founded by Sarrià neighbors and businesses. It has an indoor space with lovely stained glass windows, as well as a terrace.

I love art, so every time I go to Barcelona I try to visit a museum or an exhibit. After coffee, I would visit the Fundació Antoni Tàpies (Aragó, 255). The building was designed by modernist architect Lluis Domenech I Montaner and it’s really cool, with a beautiful library upstairs. Tàpies was one of the most renowned Catalan artists of the 20th century and the collection of his paintings, drawings, and sculptures is comprehensive and interesting. The museum always has other exhibits of modern art going on as well.

Now, it’s time for a beer or a yummy cocktail and some great tapas. I’d walk to El Velódromo, on Muntaner, 213 (a 15-minute walk) to meet some friends for dinner. El Velódromo has been a hangout of intellectuals, artists, and politicians since it opened in 1833. It’s big, it has pool tables, and great food. After spending a couple of hours there, I would board the metro, get off at the Barceloneta station and go dancing at Diobar (Marqués de l’Argentera, 27). This Greek restaurant and club has live music several nights a week, including salsa, Brazilian, and tango. Nothing like a few dances to get ready for a good night sleep after a busy day!

Isidra Mencos is a Barcelona native living in California since 1992 but she returns often to visit friends and family. Isidra’s book Promenade of Desire—A Barcelona Memoir narrates her journey from repression to liberation in tandem with Spain’s journey from dictatorship to democracy. You can read more about the book here and find Isidra on Instagram, Facebook or Twitter.