A friend was visiting Barcelona a while back. We met for breakfast and put the world to rights as we always do. He suggested he might like to write something for my blog. I had no idea what to expect. This is what he wrote. 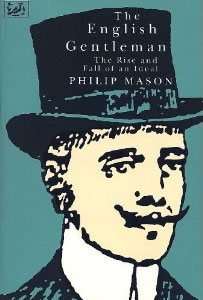 The English Gentleman: The Rise and Fall of an Ideal by Philip Mason

Ask a Barcelona barman or a Tottenham policeman and the answer is probably, “Yes.”

However it is interesting for me to notice that the concept is never translated. Whether in a Russian or Japanese conversation the words are always English. Was it a peculiar concept? Did people want to find it in Englishmen they met? In my travels, particularly to more isolated communities – like the peoples of Eastern Europe before the Wall came down – I think that they did.

In the 18th and early 19th century the English elite were fairly dissolute and were thought by many to be showing a bad example. Dr Thomas Arnold, the headmaster of Rugby school from 1828 to 1842, is credited with devising and encouraging the concept of the gentleman. It is a suit of many styles, fashioned to individual taste, but always of the same cloth. The gentleman was an enigma but you recognised him when you met him. Essentially he did things because he knew that they were right, not because they brought him personal advantage.

The concept of the gentleman gave the English a moral code to follow more noble than any religion. It did not need social standing or a title, just a code of behaviour. The principle of personal “rightness” has a better chance of creating social cohesion and morality than a set of rules devised and dictated from above.

Perhaps the concept is an anachronism. It is certainly ridiculed today by society and the educational establishment. However we educate children with facts but no moral compass. The “gentleman” of yesterday was supposed to have modesty, to avoid malevolence, to be fair and honest in his dealings and, if necessary, sacrifice himself for the sake of others, especially those weaker than himself. He was someone that you could trust.

So the “gentleman” is dead, sacrificed on the altar of selfishness, greed and bureaucratic dictates. Was he a concept for good and have we found principles of behaviour to replace his? The true Englishman still clings to the principles of Fairness and Freedom. These are the remnants left to us. We should not lose them!

The notion of the English Gentleman and what it represents I admit to never having given much thought. But this piece from Richard certainly provoked some. I have since discovered the book featured above. The English Gentleman: The Rise and Fall of an Ideal by Philip Mason. It looks like a thoroughly interesting read. To be continued…