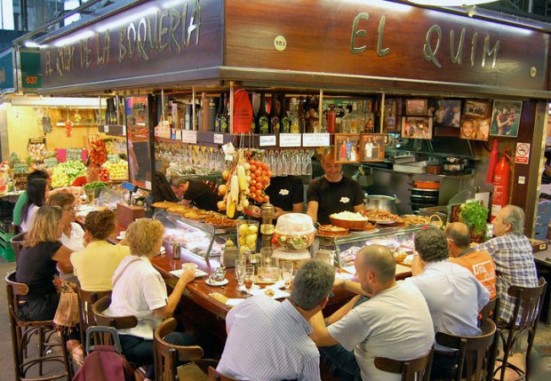 Quim at the bar of El Quim de la Boqueria

I was reminded of Quim’s place by Rachel. She did a stint there as a chef and it sounded like hard work. And you see why. All of the eateries in the Boqueria are small cramped affairs for the staff. They comprise a central area where all the staff work and serve the customers sitting at the bar around the outside. You’re separated by the counter which houses all the good things to eat in cabinets. 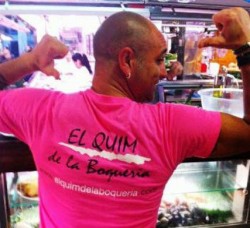 Quim in the new pink t-shirts

They used to wear black t-shirts. But you can’t miss Quim’s place now as all the staff are in bright pink t-shirts.

There is no booking or even name taking when you arrive. Your best bet is to cruise around the edge and check out who looks like they might be finished first. Are they having dessert? Have they just ordered coffee? If they’ve just been passed la cuenta then you know you’re on to a winner. I have waited 45 minutes there before! That was painful, watching the food handed over in front of you. Anyway, find your spot and stand behind the customers whose seats you want to jump into.

Once in you can order your drinks, get your menu (in English or Spanish), and try to work out which of the dishes on the menu are the fab ones you saw other people tucking into. The menus are disposable so you just tick the boxes on the menu next to the dishes you’d like. Or you can just point to the wonderful things on display.

We started with homemade croquetas. Perfectly crispy, chicken ones. Croquettes are one of those things that can range from bloody awful to a couple of delicious mouthfuls. These were at the right end of that scale.

As soon as I saw the fried eggs with chipirones (baby squid) I had to have them. At 19€ they’re not cheap but they are truly delicious. A breakfast fit for a king, for any time of the day. Beautifully fried eggs, plump chipirones, garlic and lots of pepper. Dangerously good. 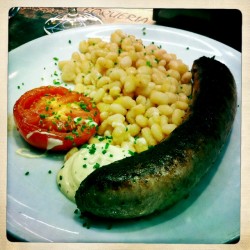 Next a Catalan favourite. Butifarra sausage with white beans and a garlic sauce. It sounds simple, and it is. Basic fare that is far more delicious than it sounds. Or looks for that matter. And at 7.50€ it doesn’t break the bank either.

Other delightful offerings that had sold out by the time we sat down were the risotto de rabo de toro (bull’s tail risotto – 14€), el plato de rovellons temporada (a plate of seasonal wild mushrooms – 12.75€), and increíble bacalao del día (incredible cod of the day – 16.75€). All looked fantastic while we were waiting.

El Quim de la Boqueria is not one of the cheaper places for lunch. But the location is great, you’re never rushed, the staff are friendly, lively and very accommodating, and the food is fabulous. For breakfast or lunch I’d highly recommend it.