“A perfect day in Barcelona for me would, without doubt, be spent during one of the sweltering, balmy days in mid-summer when your pace slows right down as the slightest movement results in beads of sweat trickling down your neck and back. At these times of year one of those fold-up fans that slips into your bag is indispensable, if you’ve not spent a summer in Barcelona then buy one in advance and be prepared. Fellas, you’ll have to make do with rolling up one of the free newspapers given out at metro stops until someone comes up with a male styled version.

So, to start my day. Seeing as it’s summer and my usual healthy appetite isn’t quite what it normally is, I might forgo a regular breakfast and just head straight to Sirvent off of Ronda de Sant Pau to pick up a large granizado de limon, a sweet yet tart crushed ice drink. The ice cream at Sirvent is also wonderful but I think it’s a bit early for a tub of that just yet.

From here I’m well placed to jump on the funicular at Paral.lel metro station and head up to Parc de Montjuïc. The funicular drops you at the cable car station but my nervous disposition when it comes to heights means I’m going to take a slow, meandering walk up to the castle through the Jardins de Joan Brossa and along Carretera de Montjuïc until I reach the castle. Even though I’ve enjoyed the views many times before I’ll stall a while and just soak up the vista of the sprawling, cramped city, the hills that skirt round it, the peaks of the mountains in the far distance and the bustle of the port.

However, the castle it not where I’m heading, instead I’m going to follow the Passeig del Migdia until I come out under the pines trees to La Caseta del Migdia. By now my hunger has kicked in regardless of the heat, so it’s time to kick back, shaded from the burning sun by the pines and enjoy a clara and a plate of BBQ whilst listening to some laid-back summer tunes. I will happily spend a couple of hours here, the claras slipping down too easily and the holiday feeling washing over me. 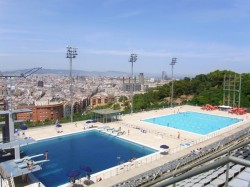 Eventually I will get restless though and the midday sun having passed it’s time to get moving again and saunter down to Barcelona’s very own infinity pool, the Piscina Municipal de Montjuïc. Nicknamed ‘the Kylie pool’ (this is where the popster recorded her video for ‘Slow’) to avoid confusion with the other outdoor pool on Montjuïc, the one at Bernat Picornell sports centre. I overlook its faded glory and slightly run down interior as I don’t think I’ve ever swum somewhere better. Once in the pool only the railings interject across a panorama of central Barcelona and beyond, which sadly can only be enjoyed in June, July and August. If only the council would see fit to extend it from May to September and maybe save it from deteriorating further. 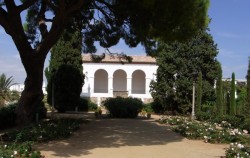 On my walk home from here I’ll make a slight detour to pass through the Greek garden and spend some time reading my book under the pagoda, watching the sun dip a little behind the MNAC.

From here heading home and a short siesta are the only things that I can manage at this point. The heat really takes it out of you, no matter how much you’ve been trying to take it easy. But the night is young and staying home is not an option so once the batteries are recharged it’s time to head out for dinner. 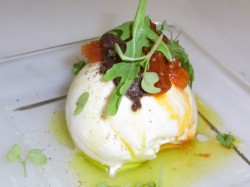 The food at Lolita Taperia

Barcelona is a food lover’s paradise and in my 20 months here I feel I’ve only scratched the surface of what’s out there to sample. However, the tapas I ate at Lolita Taperia has stuck in my mind so I would almost certainly pay it a visit again.

There’s only one thing left to end a perfect day, some good music and dancing. Clubbing starts late in Barcelona, something even after pushing two years here I find difficult to get used to. So, we’ll assume my perfect day is a Friday, in which case it’d have to be a visit to La Bodega del Onze for ‘Joint Sessions’ a night of soul, funk, jazz, Latin, reggae and other soulful music before heading to Athletic Disco Club. Only a year since their inception they are flying the flag for disco music in Barcelona and have excellent guests. At present they are holding their parties at Cabaret Berlin on c/ Bailen but the summer months should hopefully see them back on the roof of the Hotel Barceló. Must remember to keep my eye on their website with fingers crossed that there’ll be great music with 360° views around Raval and beyond.”

Claire regularly digests good views, Barcelona facts and information, great food and disco dancing. She writes the blog Moonraker Morsels about all aspects of food and eating in Barcelona.