Think you know all the Best Burgers in Barcelona? 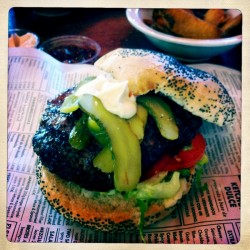 The Santa Caterina burger at Kiosko

Burgers – often derided especially in relation to McDonalds. And not the most traditional of Catalan foods. But the list of burger places in Barcelona just keeps growing and growing. A phenomenon of relatively recent years that has no sign of dying out.

I do love a good burger. Especially after my recent near death experience with a piece of steak. The allure of ground beef has appreciated ten-fold. So luckily for me burger restaurants (the posh term) seem to be springing up all over BCN. The much-loved Wushu was even turned into a burger bar by its owner Bradley Ainsworth.

In an interview with Le Cool Barcelona, Bradley said,

“Bacoa began almost by accident. I had the space closed for a couple of years and I wanted to sell it, but at a good price. So I set up Bacoa with the idea to sell it… and it turned out to be a hit. It was so successful that I decided to change Wushu into Kiosko, a new gourmet hamburger shop, which opened on January 14th.” 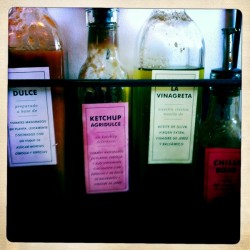 The condiments at Kiosko

Lucky bastard I say. So even a lovely South East Asian restaurant has been turned into a burger bar. And by its owner of all people! Though I have to say the Kiosko burgers are not just any burgers.

I have a friend who lives in the Hard Rock Café. He doesn’t actually live there. But he spends an inordinate amount of time there. They do an above-average burger. But I often struggle to actually walk past the place there are so many people waiting, let alone get inside. Not that I really want to truth be told.

There are of course the largely burger-only places like Bacoa, Kiosko and Pim Pam Burger, but some of the best burgers I’ve had are in places that you maybe wouldn’t have thought of. Sagàs (Plà del Palau, 13) does a very good burger. In fact the whole menu is an eye opener. And being just around the corner from Kiosko it’s the place to try when that one is just a little too busy. Taller de Tapas also does a very lovely and reasonably priced burger conceived by owner and Londoner, Kate Preston. It simply comes with a slice of tomato and caramelised onions sandwiched between coca bread. Have it with bravas or get one to share if you happen to be in there for tapas anyway. 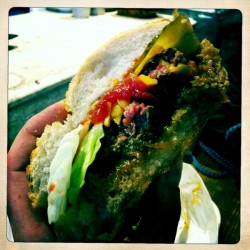 And although we’re talking meat burgers here, if you’re with someone who isn’t into dead cow there are often chicken and fish options on the menu. Kiosko does a fine fillet of salmon burger and the Meatpacking Bistro has a tuna burger with wasabi mayonnaise.

In fact, I make a not bad burger. Freshly ground steak from the Boqueria, mixed with well-smashed cream crackers, a couple of eggs, diced and cooked onion and green pepper, finely chopped, fresh red chilli, and the special ingredient, a good lashing of oyster sauce! They are fine. You should give them a go (email me for the full recipe).

Would you like a Gin & Tonic with your burger sir?

And lastly I must mention the brand spanking new La Royale. Up near Pim Pam’s new restaurant in Sarrià-Sant Gervasi this place is something special. In the same location as the once-famous 1970s restaurant, Can Massana, La Royale is truly unique in Barcelona. The menu has 11 gourmet burgers made using ecological meats from around the world – this is the gourmet burger restaurant.

Dare to taste our most exotic flavours: the suggestive combination of bison or angus beef, originally from America, or the explosive recipe of ostrich and Kenya beans from Africa. If you prefer to play safe, you can savour our delicious burgers of beef, Iberian pork meat or free-range chicken. And to show you to what extent we have reconciled burgers and healthy eating, you can try our vegetarian option from Oceania, made from tofu, soy and a lot of vegetables – and zero fat! 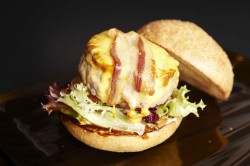 Apart from the menu (and the stunning decor) the real uniqueness of La Royale comes from them pairing their gourmet burger (and dessert) creations with a range of premium gins. Gin & tonic is known for its digestive qualities and Rafael Barrera, the world-famous gin expert, has brought this new trend to Barcelona.

La Royale is a real gem. And another twist in Barcelona’s ever-evolving fascination with the humble burger.

Where to try some of the Best Burgers in Barcelona

So, the list, in no particular order (well alphabetically actually but not any ranking order)… 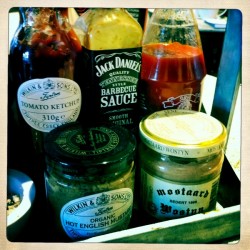 All of these burger places are marked on the map below. You can even get directions to them if you so wish.

There have been a couple of recent casualties. The premises of Burgers del Gòtic seems to have a ‘for rent’ sign up. And La Burguesa at the end of c/ Princesa (part of the Chic & Basic hotel) has had something of a transformation for whatever reason and is now called Kharma.

Even out of the ones I’ve been to so far it’s difficult to pick a clear winner. They’re all very good. But I’m going to stick my neck out and say Kiosko overall. This is based on price, quality and just doing a burger very, very well with no fuss. But all of them are worth checking out for different reasons I reckon.

Oh, and one final mention, you do have to check out the mini burgers at Cerveceria Catalana as well. Very small, but very, very good.

Are there any other places I’ve missed? Be sure to mention them in the comments and I’ll add them to the list and map. And let me know which is your favourite.