I shared this article on the Facebook page but thought it would be good to reproduce it here for those that missed it. The author visits some of the squats in and around Barcelona and asks what’s happened to the 15M movement since 2011.

In 2011 a storm of protest swept Spain. In cities like Madrid and Barcelona squares were occupied by the 15M movement in protest against the austerity mandated by the EU in response to the grinding economic crisis. This movement inspired Occupy Wall Street, and gave birth to Podemos, the radical left party that controls city councils across Spain and Catalonia.

Before coming to Barcelona to document the remains of this revolution, and to visit the network of squats and occupations that form the principal sites of resistance here, I got in touch with a squat just outside the city. I’m sitting in their library as I write. 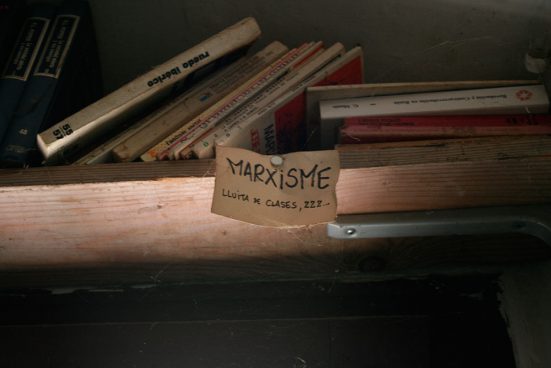 The library at Kan Pascual

This squat is called Kan Pascual. Although technically situated in Barcelona its location is rural, nestled in a nature reserve on the outskirts of the city called Collserola. It’s made of two grand old buildings – the kind you feel were never meant for the likes of us – as well as tree houses, caravans, and vegetable gardens. The buildings are legally owned by the Barcelona’s local government; once they were a summer camp for groups of children, before the buildings were condemned because of poor construction. 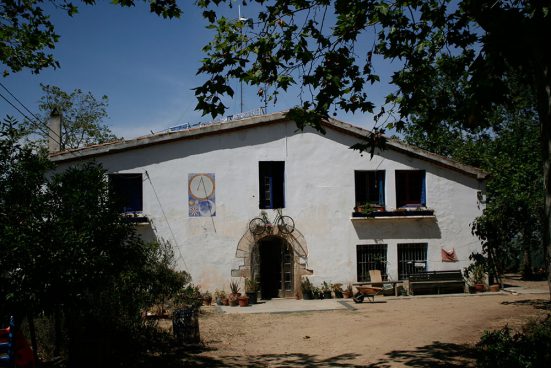 Then this group of anarchist hippies stepped in. That was 20 years ago, and many of the men and women living here now are into their fifties, some have been here since the squat was first opened. Among them is Mike, a Dublin man who left Ireland back in ‘79. Because the squat has no private owner there’s been no pressure on them to leave, and so, nearly 20 years to the day later, here they are still. Mata un político hoy – Kill a politician today – is carved into the box holding the salt in the kitchen. 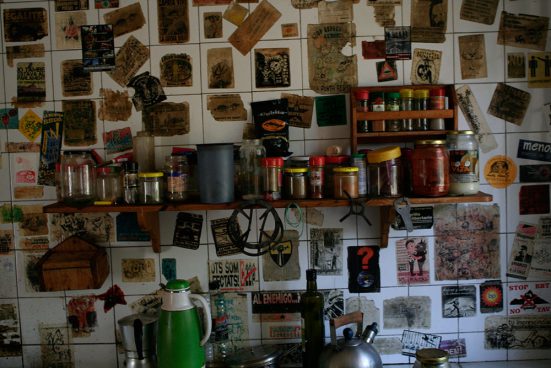 The kitchen at Kan Pascual

What do the anarchists think of the new left-wing city council, I ask Mike.
Well, at first everybody was really happy with them. Ada Colau [the newly-elected left-wing mayor of Barcelona] was a squatter herself, so things have become a bit easier for the squatting community here. The police hate her, because she’s the boss of the local police, and she can tell them to stop trying to shut down a squat. But Podemos didn’t succeed in the general elections [in June]. Everybody thought they would have the balance of power, but they didn’t. Anyway, everything here is complicated because of the game between the Catalan nationalists and the Spanish government.

Will Catalonia declare independence?
The schools all speak Catalan, the universities are in Catalan. But they don’t control the finances, the soldiers and the police, so they’re not really free. Catalonia is the richest part of Spain, but it has to pay for all the others.

But where’s the solidarity with poorer regions like Andalusia, that rely on the distribution of Catalonia’s wealth?
They’re not the same country, so why should Catalonia be supporting them? That’s what the Catalans would say. But of course the anarchists, they say what’s the difference – Catalan police and Catalan bourgeoisie or Spanish police and Spanish bourgeoisie? But of course the Catalan thing is also about culture, about music and food and dance and, of course, about language. So of course we support that.

Can Víes is a large squat near Barcelona’s city centre. The building’s history seems to chart the course of modern Spain. Originally a warehouse used by the railway company, workers turned it into a social centre in the early 20th century. During the revolution and the civil war it was used by the CNT, the anarchist faction fighting against General Franco. 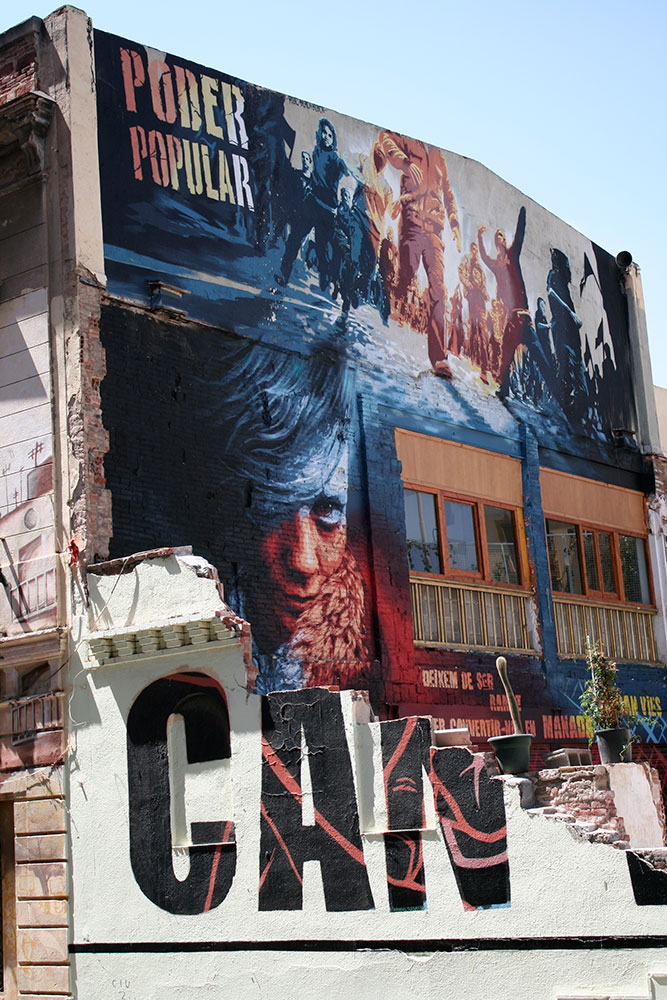 With the victory of Franco’s fascists it was converted into a church, but now, nearly a hundred years later, it is a social centre again, and the political outlook of its members has a distinctly anarchist flavour. Outside I hear an elderly man on his phone saying that he was passing Can Víes. It is obviously a well-known neighbourhood institution.

I ask Boga, a young man who lives in this squat, about its more recent history, and its relations with the local community.
It’s been open for 19 years. It was opened because of a demand for spaces for young people, but it wasn’t open all the time. Three years ago it was evicted, but it was at a point when the 15M and things like that were increasing – so when people saw something happening, when they saw a house being knocked down before their noses, they came out to protest. Normally when there’s an eviction there’s one day of protest and it’s by the usual people, but this time it was different, there was four days of riots and mobilization.

Was there support from the local community?
The squat had been here for around 17 years and it looked a lot to the neighbours. There were a lot of people fighting for different things – labour laws, mortgage relief – and people saw their fights reflected in this. They said ‘I’m not a squatter but I support these people’. We burned the digger they were using to destroy the building. Everything was a ruin. So we came on Saturday morning to reconstruct the place. All this room is new, it was built by us. [He waves his hand around the room.]  And now we are here. So it was a victory for us, for the social movement. We could say, if we want we can stop the government.

What happened to the 15M movement?
It’s not finished, but it’s really reduced due to the parties. Podemos and things like that have reduced it a lot. There are not a lot of people who say I want to be politicized all the time. They say I want to improve the situation because I don’t believe in this system, but when a party comes along and says I think like you, you vote for me and I do the rest. And all the people say, OK, OK, I don’t worry because I have all these people working for me.

It’s a bit like what happened in the Second Republic in Spain. Ada Colau can’t do radical left-wing things because if she does the right-wing will eat her completely. Her plan was ‘I will make a proposal and if there are big demos on the street it will pass’. But the opposite happened. Because she got into government lots of people said Ada Colau is there now and she’ll do the rest.

The same thing happened with the Second Republic. The government – to avoid the right rising up, because the police and the army and the Guardía Civil were all in favour of the right-wing – were stopping the anarchists all the time, just as the army or the right themselves would have done. 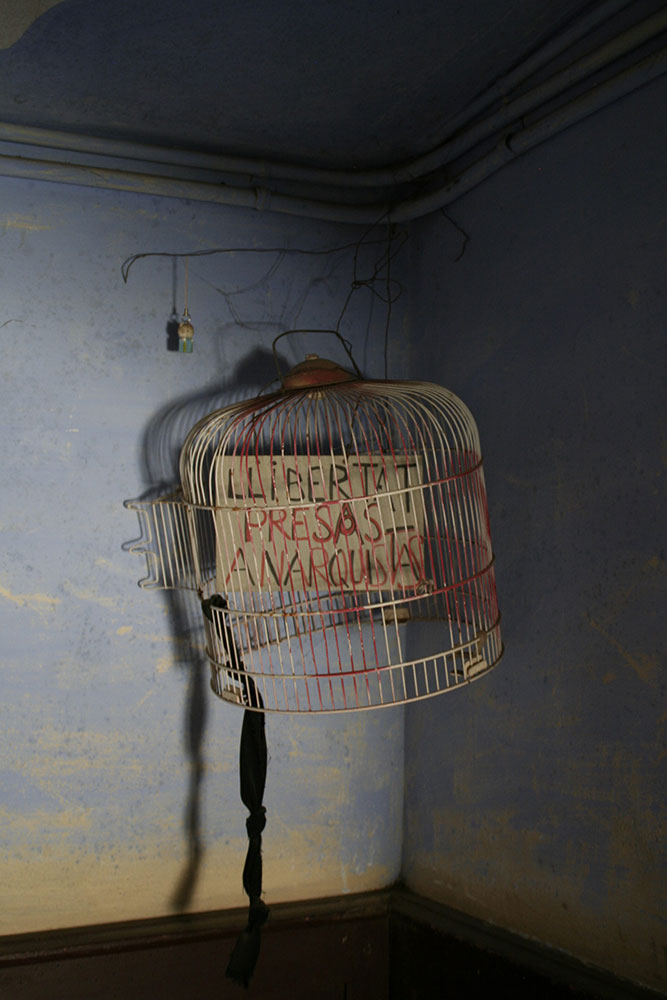 El Experimental is another spot in the Collserola nature reserve; right in the middle of Barcelona, but getting there isn’t easy. Follow Jesus Christ, I’m told. They mean the statue of Jesus on the cathedral on top of the mountain. I arrive at lunchtime, and the occupants are seated around a long table sharing a communal meal. There are about 20 of them and they invite me to join them. Unlike the occupants of Kan Pascual, they are young, almost all are in their twenties.

This house too is big and grand. It too belonged to the city council, but unlike Kan Pascual and Can Víes, this squat has only been open a year and a half. Yet in that time there has been feverish activity. The squatters have developed vegetable patches based on the permaculture principle. There is a core population of around 15, but also a floating population of short-term visitors. Most of these are permanent backpacker hippy types, dreadlocked young people who have been travelling around the world, living in squats and surviving on food scavenged from bins and coins earned busking on the streets for over a year. 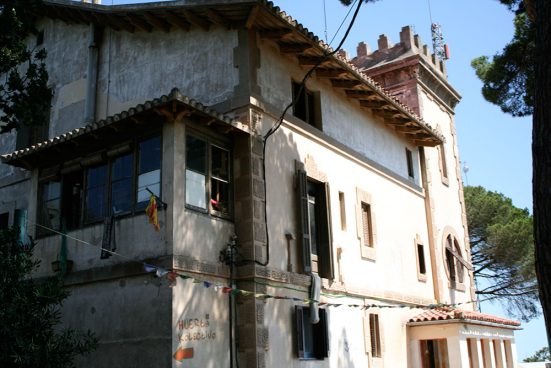 It is immediately clear that it is a different kind of place to Kan Pascual and Can Víes, which were covered in anarchist stickers and posters declaring solidarity with such places as Oaxaca and Chiapas. El Experimental is instead littered with statues of the Buddha and Hindu deities. Evidence of the fetishization of cultures, such as Eastern or indigenous American religions, that are ‘other’ to Western culture, and seen as somehow purer, is everywhere.

One occupant, who professes to have lived in eco-villages and communes around Italy and Spain, is writing his thesis on the similarities between indigenous Colombian cultures and western eco-villages. Where Kan Pascual bears a poster reading ‘Tourist Go Home!’, the majority of the occupants of this squat are a sort of tourist themselves – only about a quarter are Catalan.

Does that not make this a kind of island of unreality, an escapism from the conflicts that most people in the city have to live with? Where is the solidarity in that outlook?
Yes of course. Or maybe it’s an island of transreality or ultra-reality. We are not fighting the system, because everyone is in their own world. If there’s activism here it’s cultural activism. But of course, to be doing cultural activism, in the end, is political and is social. We are sending a message with culture.  [He strums his guitar.]

I ask him about relations with broader social movements and the 15M.
Lots of us were involved in 15M. I was too, but we didn’t know each other. The 15M was false. It was really exciting and it moved a lot of people, but it was incapable of effecting change. We didn’t have a real capacity to assault the system.

Do you have that capacity to change the system here either?
At least here we can change our own reality. I suppose there are still people acting like I was acting when I was younger. I like living like this, playing my music and saying my poems. I have forgotten the system completely. I know it exists and the problems continue, but you have to save yourself. I have some friends who talk about the next world war. They say lots of people are going to die – but that’s OK, that’s fine. [He smiles.]

Rather than be a threat to the system, this squat is more of a hotel for transient New Age spiritual types than a hive of radical activism. From my own experience of the squatting scene in Dublin, these seem to be the two tendencies into which most squatters fit – the activist leftists who have taken leading roles in the protests against Irish Water, and who continue to lead the housing movements; and a kind of transient drifter for whom ‘politics’ is a dirty word, who rarely play a major role in the struggles of the cities they pass through.

This article by Tomás Lynch (words) and Georgia Lalor (photos) for Novara Media is licensed under a Creative Commons Attribution-ShareAlike 4.0 International Licence.