This post has been updated from the original to reflect the latest (pretty) charts available. 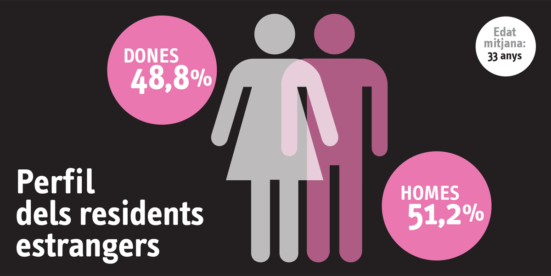 I’m fascinated by data. Well not so much data, as the informative ways it can be displayed. One of my favourite coffee table books is called Information is Beautiful (link at the end).

There’s a page on the Ajuntament de Barcelona website called Studies on Immigration that contains some great information about Barcelona immigration statistics. I spent far too long poring over these demographics when I should have been working. I thought you might find some of them interesting too!

Below are some snapshots from the Població Estrangera a Barcelona (Foreign Population in Barcelona) PDF about some of the demographics in Barcelona. Unless you happen to be a bird of prey click on any of the thumbnails to scroll through larger versions.

Immigration to Barcelona by continent

Marriages by nationality of the spouses

Education of foreigners over 16 years old

Number of foreign residents by district

Percentage of foreign residents of the total by district

These immigration statistics are from January 2013. There is more recent demographic data available, as recent as January 2016, but unfortunately, they stopped creating these pretty graphs in 2013. And let’s face it, unless you’re an academic, who wants to read through reams of data tables.

But, for the academics out there, grab a coffee, or something stronger, and visit the Studies on Immigration page for tons of the stuff.

You can find the new edition of Information is Beautiful on Amazon for an incredibly reasonable 7 pounds and 99 pence (at the time of writing).

Is there any other interesting data about Barcelona or Catalonia you know of?