He doesn’t sound Spanish, he doesn’t even look Spanish, but second-generation Catalan, Joel Serra Bevin certainly knows Spanish food. Papa Serra was his grandfather and after living in New Zealand, Australia, London and New York, Joel has come back to his roots and started his Barcelona Culinary Adventures. 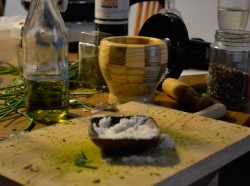 His Spanish cooking classes and food market tours in Barcelona are a fantastic introduction to this fascinating cuisine in the city that Anthony Bourdain of No Reservations fame described as “the most exciting place to eat in the Western world”.

Joel was kind enough to invite me along, so I met him, and the rest of the group, at 9am one morning at the entrance to the Boqueria market. Joel furnished us with glasses of cava and explained a bit about the history of the market and how it had developed over the years. I’d never been to the market at such an early hour and it was such a joy to see it a lot less crowded than I’m used to. 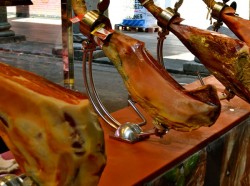 Joel guided us around the market on a 45 minute tour. We stopped at various stalls and he explained specific produce and ingredients, how they are prepared and eaten, and even though I visit the market every week I learnt so much about some of the things that I was a little too nervous to ask about previously. It was great to have someone there to fire questions at as we went.

He explained the processes behind the different types of Spanish ham, Serrano, Iberico and Bellota. We discussed bacalao (salt cod), how it is prepared and eaten and the texture that this preservation process achieves. 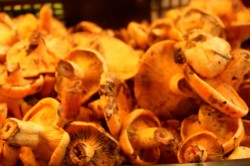 Rovellones, the ‘Golden Fungus of the Gods’

It was the season for Rovellones (or Robellones in Catalan), the ‘Golden Fungus of the Gods’. These are some of the most unappealing mushrooms I’d ever seen with their green, mouldy underbelly’s. But I’ve since had them a few times and their flavour is quite unique to any mushroom I’d tried before. Fried in butter and garlic and finished off with parsley they are a great accompaniment to many a dish and equally good on their own. With an earthy flavour and a meaty texture, the short two month season of these mushrooms mean they are highly prized. 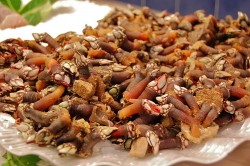 And finally, percebes, or more commonly known as goose barnacles. I’d always marvelled at these little Galician critters. With their high price of nearly 50 euros a kilo (a good deal of which looked like it would be rock), these guys can be treacherous to harvest too. They attach themselves to coastal rocks where the waves crash in, dependent on this water motion for bringing in their food. So it can be a game of cat and mouse to collect them as the waves go in and out. Cooked fairly quickly, the flesh is squeezed from the bottom straight into the mouth. Once you subtract the bits of cliff still attached to them, the end claw-like shells and the gecko-like skin covering the flesh I can’t see you getting more than about 300g of flesh out of a kilo. Pricey, but something I’m definitely going to try myself at home. 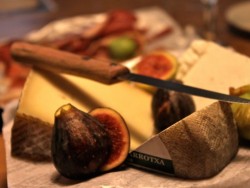 So, we left the market ready to cook. We walked to an apartment close by where everything had been set up for our arrival. While drinking wine and eating pa amb tomaquet (bread rubbed with tomato), olives, jamón, figs and cheese, Joel explained a bit about himself, his background (he was once a contestant on MasterChef Australia), his love of Spanish cooking and the dishes we would be preparing that day. 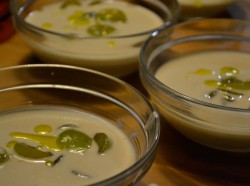 These were the dishes we were going to be cooking:

We were split into pairs and given two dishes each to prepare. My partner and I were given spiced carrots with cumin yoghurt and crispy prawns with allioli. 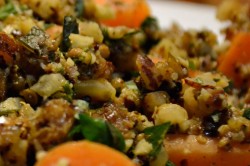 Now this wouldn’t be a culinary adventure without some hard work. So, on to the spiced carrots. Boiling, roasting, picking and chopping. Peeling, juicing, zesting, frying, grinding and finally mixing. All for a few carrots! But once tasted you could safely say these were no ordinary carrots. Orange juice, fennel, cumin, hazelnuts, parsley and raisins all combined to make them deliciously warming and comforting. Definitely one for the winter months.

Then to the crispy prawns with allioli. Now by this time I’d had a few glasses. Joel certainly wasn’t shy with the wine. And it was still before midday. So I thought I’d nabbed the easier task of making the allioli rather than peeling and gutting a bag full of raw prawns. Personally I’d have left the poo in them but apparently that wasn’t the culinary way. So while my partner, who by his own admission, had hardly peeled a banana, started removing the intestinal tracts from a large bag of crustaceans Joel talked me through the allioli process. 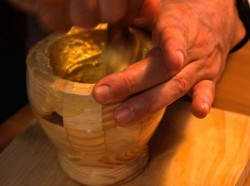 There’s many different variations of allioli. But this one was just garlic, salt and olive oil. Crush the garlic cloves in a pestle and mortar with a little sea salt. And then start adding the olive oil little by little while constantly beating the mixture with the pestle, or is it the mortar. Anyway, the garlic emulsifies with the oil producing a mayonnaise like texture. The key is not to add too much oil too quickly. Apparently only 50% of first timers get it right first time around and I’m proud to say I was in the right half. 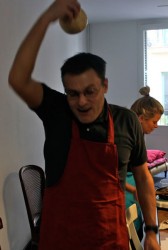 I was told the test is to hold the finished mixture upside down over your head and as long as it doesn’t come out you’re good to go. This sounded like a stupid idea to me but as I said, I’d had a few by then.

So all in all a very enjoyable experience. All the time you are watching what the others are doing and not just learning about your own particular dishes.

At the end of it all the table is cleared and you sit down to share the fruits of everyone’s labour. With a few more glasses and some ooo’s and ahhh’s we finished at around 2pm. And it’s safe to say I came out feeling thoroughly replete. 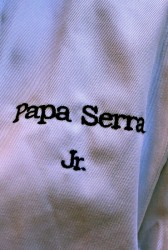 For visitors or expats I can highly recommend Joel’s tours. His knowledge and enthusiasm is infectious and it’s fascinating to cook the things you’ve seen and eaten out in Barcelona. The tours can be tailored to your group so although ours was relatively basic you can request a more in-depth culinary experience.

But hey, don’t take my word for it, check out his reviews on TripAdvisor!